An Uncanny Motivation for Unity 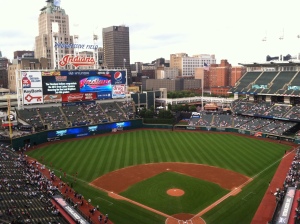 Sports.  We think of them as games, a pastime, something to watch on the weekends right?  But there is something else that is going on that I recently noticed that I actually think is really cool.  That’s a little thing called, brotherhood.

I wasn’t always huge into sports.  I played them (baseball all the way until college), but I never really thought they were anything more than just a fun thing to do, something that relaxes us.  However, the other day me and my girlfriend were taking a walk to this event in the stadium of our favorite baseball team, the Cleveland Indians.  It was horrifically snowy, I’m talking like Silent Hill/Armageddon/no school in Alaska type bad.  Messy to say the least.  This also then required us to WALK four blocks in snow up to our knees.  Seriously, I’m not kidding.  However, we kept going, and once we got to the event, it was PACKED.  Completely sold out, so much so that they had to add an extra day.  But why?

A lot of people will say that it is because people wanted to get an autograph, or see the inside of the stadium that no one ever really gets to see.  Granted, that is probably true, though I think there was something else at play too.  There was a want and need to be a part of that social group that only existed that one night, that only existed at the stadium.  For those four hours, WE were the Cleveland Indians and WE were the ones that were joined together as a family, as cliche as that sounds.

No matter what people say, we all know why we love a certain sport or follow a certain team.  Sure, they might have cool jerseys or have a star player that you like, but there is an underlying benefit from sports, that being that if fulfills your NEED to belong, and your NEED to be a part of a certain group.  Let’s be honest, there is nothing better than sitting in a section full of battle-tested die-hard Indians fans watching them destroy Detroit, it’s just something that is hard to beat.

So next time you’re sitting around getting mad at your team or if someone is yelling at you because you like sports and they think it’s dumb, just smile and turn the other cheek.  You’re part of something bigger, more exciting, and something that no one can take away.

I am a guy who likes to do a bunch of different things. These are my things.
View all posts by paullaux22 →
This entry was posted in Blog and tagged akron aeros, akron rubber ducks, basemall, Cleveland, cleveland indians, columbus clippers, fans, indians, minor league baseball, MLB, paul laux, Paul Laux Photography, progressive field, sports. Bookmark the permalink.

Thoughts Of The Round Table